“Number in Mind: The Philosophy of Numerical Cognition”
February 18, 2017, School of Advanced Studies, University of London

In my paper I show that applying the method of conceptual engineering to interpretation of the research in number cognition can open up new perspectives on what natural numbers are and how humans construct them.

Conceptual engineering is understood as a methodological toolkit comprising conceptual analysis, explication, explanation etc. In the paper the “engineering” is applied to early math knowledge and to “full-blooded” arithmetical concepts known today, to their both syntactical and semantical aspects and on both local and structural levels.

In consequence, conceptual gaps between the contemporary mature concept and the first conceptual content get disclosed. Most importantly it becomes visible that regularity of distances between subsequent elements of the natural number progression does not descend from subitizing or ANS nor from the commonly used Linguistic Number System. This regularity is in the basis of recursivity of the number progression. Its presence is visible in tallying and at the linear number line from Cartesian coordinate system.

The solution to this problem that the paper proposes is based on a version of enculturation. Enculturation is understood as the idea that cultural factors, such as language, influence activation of new cognitive modules that add to the core specific ones in providing content to a specific concept. I advance hypothesis that the innate sensibility to rhythm (beat-induction) might be such a new cognitive module participating in number concept creation. This explains our intuition that the use of tallying is related to the number concept creation. This view is also coherent with Chomskyan claim that only humans count (as opposed to other animals) because the only purely human aspect of language is recursivity hidden in various aspects of its structure.

On the basis of my arguments showing that the concept gets input from many different sources, I opt for pluralism in arithmetic. For practical reasons I propose to adapt an “extended” version of Frege’s constraint according to which the criterion of choice of the foundational principle for a mathematical theory should be such that the main feature enables definition of all other important features of natural numbers. This “extended” constraint can be adapted to developmental cognitive sciences by replacing the research of the “true” way in which children acquire the conceptual content, by the research of the optimal way that will foster children learning of what we today understand as natural numbers.

I have written a paper in the area of art theory:  On use of model-theoretical categories in art

Title:
Can Church’s Thesis be Viewed as a Carnapian Explication

Turing and Church provided two different definitions of computability that turned out to be extensionally equivalent. Since the definitions refer to different properties they cannot both be adequate conceptual analysis of the concept of computability. This insight has led to a debate concerning which definition is adequate. Tennant and others have suggested, in effect, that this philosophical debate, which shows few signs of convergence on one view, can be circumvented by regarding the theses instead as explications, or “rational reconstructions”, in Carnap’s sense. This move opens up for the possibility that both can be adequate, albeit in their own different ways. In this paper we focus on the question whether Church’s thesis can be seen as an explication in the framework of the Peano axiom system in the light of the fact that Carnap himself seems to rule out this possibility. We consider a recently proposed interpretation of Carnap’s view due to Dulith-Novaes and Reck that, if satisfactory, would resolve this conflict, finding their reading of Carnap problematic. Finally, we consider various ways of formulating Church’s thesis so that it becomes compatible with explication as Carnap viewed it.

Frege in Grundlagen formulated a severe criticism of ‘psychological influence’ in foundations of mathematics. My general objective is to reconsider Frege’s position and re-examine possible mutual influences between the research on the concept of natural numbers in philosophy of mathematics and the results from developmental cognitive science. In this talk I will focus on one of the basic cognitive systems of number-cognition, called Approximate Number System.

The 16th Workshop  on the Roots of Pragmasemantics will be held on the top of the Szrenica mountain in the Giant Mountains on the border of Poland and the Czech Republic on 20-23 February 2015. The two main themes of this year’s convention are (1) “Mental Representation of Semantic and Pragmatic Lexical Knowledge” and (2) “The Role of Linguistics in the Cognitive Sciences”.

Abstract: When we say that the population of Norway is 5 million people, we do not usually mean that there are exactly 5 million people living in this country. On the contrary, if the country happened to have a population of no more and no less than 5 million, we would need to add “exactly” to convey this information. Why do phrases like “5 million,” “two hundreds” or even, in some contexts, numerals denoting smaller numbers like “forty” tend to be interpreted as approximations (cf., e.g., Krifka 2009)? Is it only a matter of pragmatics or is the denotation of these numerals vague? Is the sentence “Norway has a population of 5 million” true if the exact number is 5,109,059? Or is it false but assertable? Drawing from recent developments in cognitive science (e.g. Dehaene 2011; Carey 2009), we will argue that our preference for vague interpretation of numerals might be due to the approximate number system (ANS) being the primary source of our mental representation of numbers, and hence using exact numerals as vague quantifiers is not only a matter of convention. ANS forms one of the core cognitive systems responsible for our representations of quantitative information. Unlike the verbal representations of discrete quantities, ANS-related representations are believed to be analouge and intrinsically imprecise. In the proposed study, we investigate how the practice of use of exact numerals as vague quantifiers correlates with the structure of ANS.

Natural numbers are studied in different disciplines from different perspectives, but there is little cross- or interdisciplinary work on this topic. In this presentation, we consider two fields that study natural numbers: philosophy of mathematics and cognitive-developmental psychology. We believe that each field could benefit from insights generated by the other, but that mutual understanding is often hampered by differences in background assumptions, as well as by terms that are used in both fields, but to mean different things. Our objective is to facilitate future collaborations between philosophers and psychologists by clarifying similarities and differences in the background assumptions with which each field approaches the study of natural numbers, as well as in how each field typically uses the terms “number concept,’’ “bootstrapping,” and “placeholder structure.’’

Workshop: Mathematical cognition and its relevance for the philosophy of mathematics
August 30, 2014, University of Bucharest

A paper of mine “From the Computability over Strings of Characters to Natural Numbers” just appeared as a chapter of Olszewski, Brozek, Urbanczyk (eds.), “Church’s Thesis: Logic, Mind and Nature”, Copernicus Center Press, 2014.

Preprint is available on my academia.com webpage.

In Spring semester 2014 I visited Sarnecka Cognitive Development Lab at University of California at Irvine. The main research line in the Lab is a study of number cognition in preschool children. My objective was to understand specificity of cognitive scientists approach to number concept and to study the possible use of their results in philosophy of mathematics. 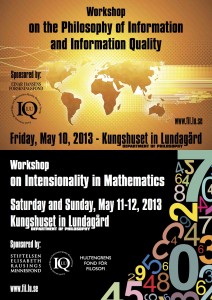 The theme of the workshop is the mathematical and philosophical investigation of the choice of background models, with particular attention to models for computation and the choice of axiom systems for arithmetic which have great importance for the epistemology of mathematics. The specific light in which these topics will be investigated is the role of intensionality. The general aim of the workshop is to foster the dialogue among researches working on issues related to intensionality in logic, philosophy of language, philosophy of mathematics, computer science, computability theory, number theory and also study the reasons for intensionality from the cognitive science perspective.

Some examples of the issues that the workshop aims at addressing include the Frege-Hilbert controversy on the axiomatic method and the distinction between syntax and semantics; structuralist versus (neo)-Fregean approaches to the choice of axioms (the existence of a mathematical structure is granted by the possibility of describing it with a coherent and hopefully categorical set of axioms, versus the idea that the first principles of a mathematical theory should capture the properties of the mathematical entities in question); to what extent does the choice of axioms determine what is further knowable about the mathematical structure which is being described; what intensional logics can better tackle intensional and epistemic paradoxes; what are logical connectives, whether there are intensional constraints on the choice of natural numbers as the domain for the formal treatment of the informal notion of effective computability, and what would be the philosophical consequences of understanding Church’s Thesis on arbitrary domains. Moreover, we will discuss topics related to the formation of mathematical concept as studied in psychology or cognitive sciences, and also the usefulness of cognitive science methods in epistemology of mathematics.